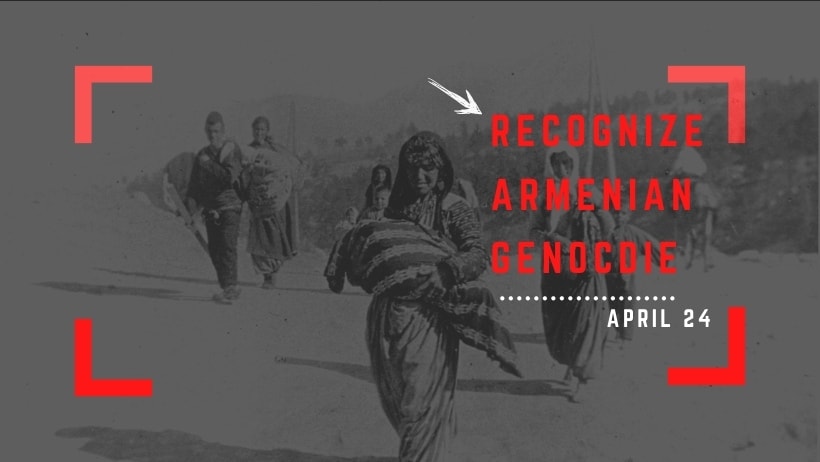 Another 24th April has come and, as always, Armenians all around the world will be honoring their ancestors by commemorating the Armenian Genocide from World War I.

But it seems like this year, things will take on a different note as the current U.S. administration and the President of the United States Joe Biden allegedly plans to formally recognize what many know already- that what was done to the Armenian population by the Ottoman Empire always was and always will be a genocide.

Armenians, whose many generations are still affected by the event from 1915. when around 1.5 million Armenians were killed by the Ottoman Empire, are constantly getting wronged by nations all around the world simply by not recognizing that what happened to their people was in fact a genocide.

Turkey, the modern hair of what was once the Ottoman Empire still refuses to believe and admit that any such incident happened and goes a long way in its attempts to discredit both the Armenian people and its history.

Still, Turkey has always been a key chess piece in the game of Global Politics and many governments along with their presidents refrained from getting on its bad side by formally and officially acknowledging the Armenian Genocide.

In his campaign, Joe Biden promised to recognize the massacre of Armenians as what it actually is, but whether he will go through with it remains to be seen. The relationship between the current U.S. administration and the Turkish leader, Recep Tayyip Erdogan, is already pretty tense. Turkey’s foreign minister himself has warned that recognizing the events from 1915 could harm the ties between the two countries.

But no matter if the announced recognition takes place this April 24th, the Armenian people, as well as many historians around the world, will know that what happened in 1915 was one of the most gruesome and inhumane genocides in the history of the world.

Armenian Genocide: How It Started?

”Genocide is the intentional action to destroy a people—usually defined as an ethnic, national, racial, or religious group—in whole or in part.”

This is exactly what happened to the Armenians during World War I when the Turks of the Ottoman Empire in a series of events ended around 1.5 million Armenian lives. This was done systematically and involved an elaborate plan of deportation and massacres of the Armenian civilians.

Most historians agree that what happened to Armenia was A genocide, with a well-thought campaign to eradicate a whole group of people. Still, to this day, the Turkish government does not acknowledge the gravity of the events that took place prior to and during World War I.

To fully understand why genocide happened, we must travel a few centuries back in time, when the Caucasus region of Eurasia was home to the Armenian people. It was and it will be for almost 3,000 years, but they will be intercepted by pogroms, genocides, war, and misery.

But back in the 4th century A.D. Armenian people were there and have just made Christianity their official religion. Their location meant they often were under the control of different empires and so in the 15th century it fell under the power of the Ottoman Empire.

The difference in the religion between Armenians and the ruling class, one being Christians other being Muslims, was not a cause for confrontation. It certainly didn’t make life any easier for the Armenian people as they had fewer legal rights and had to pay higher taxes, and as long as they do pay them, the Ottoman Empire allowed some autonomy to the religious minorities.

The real problem was that, despite being under the harsh Ottoman rule, the Armenian people strived. They were wealthier than Turks in the region and more educated, which caused jealousy and resentment within Ottoman rulers.

Sultan Abdul Hamid II, a despot by design, always feared that Armenia will be more loyal to the Russian empire because of Christianity. When the Armenians grew so big to start a campaign for basic civil rights, the sultan stated:

“I will soon settle those Armenians. I will give them a box on the ear which will make them…relinquish their revolutionary ambitions,”

– Sultan Abdul Hamid II stated in an interview in 1890

What he promised, he delivered, and in the years between 1894 and 1896 Turkish soldiers and civilians both ransacked many Armenian villages and cities, massacring thousands of Armenians.

In 1908 Sultan Abdul Hamid was overturned by a new government called ”Young Turks’‘. Armenians first rejoiced, hoping that the new government will allow them an equal place in the society, only to learn that ”Young Turks” wanted to purge the empire of everything that is not Turkish- especially Cristian non-Turkish minorities.

When World War I began with Turkey siding with Germany and Austro-Hungarian Empire, the Turkish government became even more fearful of the Armenian population. They reasoned that all Armenians were traitors and that, in their attempt to win their independence, they would fight for the enemy’s side.

The treatment of the Armenian population was worse than ever, but the Armenian people still saw a way to fight for their rights. They organized battalions and helped the Russian army fight against the government that massacred their people in 1894 and 1896.

Armenian people helping the enemies was exactly what the Turks waited for to begin their campaign for the ”removal” of Armenians.

And so, on April 25, 1915, it all began. Armenian intellectuals were first to be arrested and executed by the Turkish government. The rest of the Armenian civilians were taken out of their homes and sent on a death march through the Mesopotamian desert.

They weren’t allowed to bring any food or any water. From time to time, they were made to walk under the scorching sun naked until they die from dehydration or exhaustion. Whoever stopped to rest was shot.

All who avoided the death march were left to face the ”Special Organisation” and their ”killer squads”. Those were made of ex-convicts and murderers with only one task- ”the liquidation of the Christian elements”.

This organization was created by the new government, the ”Young Turks”. Unofficially, these forces hunted down any remaining Armenians, killing them in the most brutal ways- drowning them in rivers, crucifying them or burning them alive, and often throwing them off cliffs.

Armenian women were raped and made to serve as slaves in ”harems”, and children were kidnapped and converted to Islam, after which they were taken in by a Turkish family. Muslim families moved into what were once Armenian homes and claimed them as theirs.

At the beginning of the genocide there were around 2 million Armenians in the Ottoman Empire, but after 1922, when the “Turkification” program (i.e. the Armenian Genocide) there were only around 390,000 Armenians remaining.

After World War I, the Turkish government was fast to deny any genocide has happened. Their actions and campaigns towards the Armenian people were, in their opinion, justified and a necessary war measure since Armenians were the enemy.

As Turkey grew and became one of the world’s most powerful and politically influential countries, it made important allies like the U.S., along with other Western nations. Because of this, condemning their actions from World War I and recognizing the Armenian Genocide was delayed in many ways and for many reasons. Many governments simply didn’t+ want to anger Turkey by saying what was clear to everyone, so the term ‘’Armenian Genocide’’ became taboo.

Having a U.S. president formally recognizing the events as genocide is a big step, particularly so because until 2004 the American news avoided using the term ”genocide” related to the events of 1915. However, in 2010 the U.S. Congressional panel voted for the recognition of the genocide, and in 2019 the U.S.

House of Representatives passed a resolution that recognized the Armenian genocide officially. Now, it seems like Armenians, along with everything they’ve been through throughout history, will finally be acknowledged and recognized.

PM Pashinyan’s Visit To Syunik Failed Due To Angry Protests