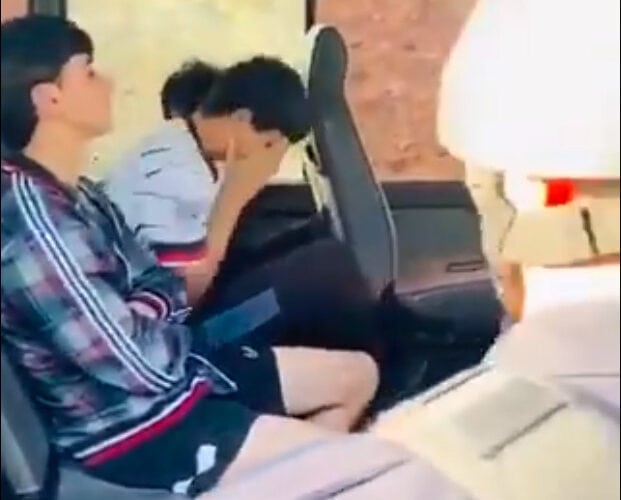 On Sept 17th, another scandal broke out when Azerbaijani soldiers, for reasons unknown, decided to terrorize Armenian children by illegally searching their bus.

The purpose of their actions was nothing more than to intimidate the children, and they have successfully done just that by asking for the children’s phones under the pretension of looking for specific video footage.

All boys and aged between 15-16, the children were traveling from Armenia to Artsakh to play a football match. Tatoyan further informed that the soldiers ”kept the children’s bus for 10-15 minutes. During that time, they scraped the Artsakh flag off the bus with a knife.”

What’s more outrageous is the fact that Azerbaijani sources proudly displayed the video of the incident, and the video soon went viral on Azerbaijani social media platforms, along with several thousands of insulting comments, and what’s worse, calls to kill Armenian people.

Tatoyan added that the incident resulted from years of Azerbaijani anti-Armenian propaganda and added that the video was documented as evidence to back up these claims.

Is Scaring Children a Distraction?

Just around the time the Azerbaijani soldiers illegally stopped the bus carrying Armenian children, another incident immerged. However, this incident was pretty much overlooked since the public eye was turned towards the children.

Around 12:30 local time, an Artsakh soldier, Private Vruyr Shahramanyan, was shot and suffered wounds when Azerbaijani forces opened fire in the western region of Artsakh.

Following the incident, the Artsakh Defense Ministry notified the Russian peacekeeping of what was a clear violation of the ceasefire agreement by Azerbaijan.

It raises the question of whether terrorizing children was done to cover this action, considering that violation of ceasefire can bring many problems to Azerbaijan.

There are several grave violations against the children that UNICEF counts as war crimes. During the last Nagorno-Karabakh war, the Azerbaijani side accumulated many other war crimes, but lately, the mistreatment and other sinister actions are more aimed toward children.

On October 4, it was reported that Azerbaijani forces attacked and destroyed a school in Stepanakert. A day later, on October 5, the same thing happened to the school in Tatar. This is a significant violation of children’s human rights, including rights to education.

Moreover, such attacks can have lifelong consequences on children’s education as well as economic opportunities. In other words, by shelling a school, you rob kids of their education, knowledge, and finally, job opportunity, thus destroying a country by creating a poorly educated generation.

When the video appeared on social media, the global community was fast to respond. Many replays and videos showed Azerbaijani servicemen removing the Armenian flag from private-owned trucks displaying the map of several surrounding countries and their flags.

However, the Azerbaijani community reply’s contained images of Azerbaijani children killed in the past 30 years of the Armenia-Azerbaijan conflict. While it is unfortunate that many children suffered such a fate, it is essential to point out that there were children casualties on the Armenian side too.

However, a child killed in war cannot be an appropriate answer or excuse to terrorize and scare other children. Still, it seems that Azerbaijan is adamant in prolonging the hate toward Armenians and leaving it as a legacy to their children.