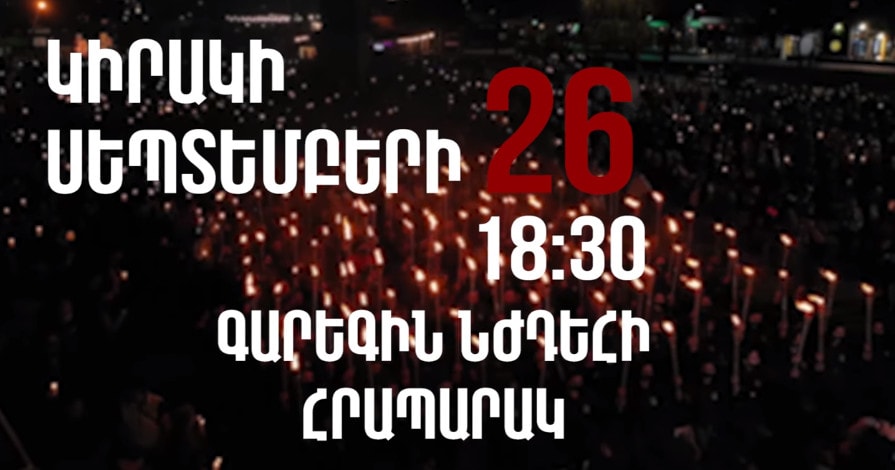 Armenian political party Armenia Alliance has announced the plan to hold another torchlight procession. The procession, set for September 26, would head toward Yerablur Military Cemetery in Yerevan, and it would pay tribute to all soldiers killed in last year’s war in Artsakh.

According to the bloc’s announcement on Thursday, the march will start at 6.30 p.m. from the Garegin Nzhdeh Square.

“September 27, 2020: A war that could have been averted, a war we could have won, a defeat that was planned. One year on, those responsible have not been held to account yet,” the bloc said. Join the procession and candlelight vigil in memory of our heroes, our holy martyrs! Let’s show the enemy that the Armenians have not given up,” the announcement video noted.

Commemoration Instead of Celebration

Earlier this week, Armenia celebrated its Independence Day, but the celebrations were discontent about the government program regarding the celebration.

The public opinion was that no celebration should take place and that the scheduled concert should be canceled. Instead, people stood in silence with candles lighted in memory of those who gave their lives in the 44-day war in 2020.

Armenian filmmaker Armen Grigoryan gave a statement to the reporters: “Join the march, regardless of who the organizer will be. Now is not the time to split into parts on the ground of politics. The important thing is that healthy forces come together.

Political affiliation, religion, and nationality don’t matter. Join tomorrow’s march if you consider this land yours,”

The September 26 procession, although organized by Armenia Alliance, a political party led by former President of Armenia Robert Kocharyan, seems to be everything that people genuinely want at this moment.

All soldiers who lost their lives in 2020 during the 44-days war will be buried in the Yerablur Military Pantheon, including those whose remains have yet to be found.

The official death toll counts 3,773 Armenian servicemen, with another 243 soldiers whose fate remains unknown and many prisoners of war who still haven’t returned home.

Yerablur Military Pantheon is currently under construction with the final result of giving all tombstones identical appearance and standards, similar to the military cemeteries in other countries.

However, architects and family members of those buried oppose the amount of concrete used, stating it leaves no room for green zones and causes further problems if any remains need to be added to the graves of the fallen serviceman.