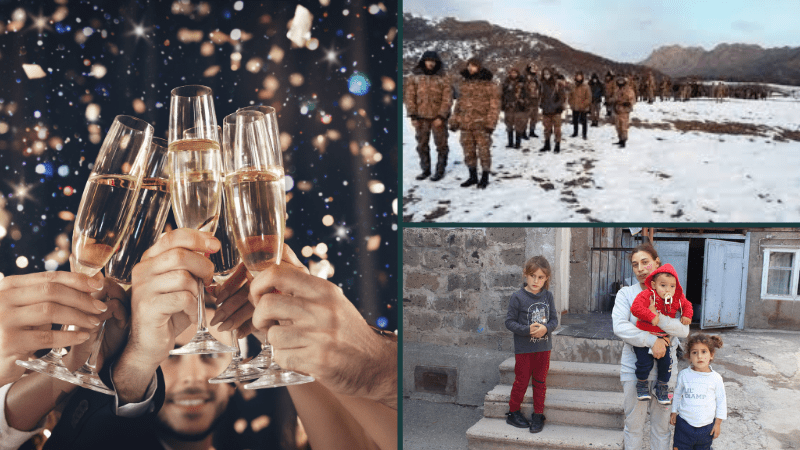 “When corruption is the priority, honesty becomes evil.”

On the last Monday of 2021, Nikol Pashinyan decided that, while many may be forced to give up corporate New Year parties, his political party should not suffer the same fate. So, this Monday was reserved for celebrating all that the Prime Minister, party members, and supporters within the Armenian government have accomplished and achieved in the past years !?.

…people in Armenia are still living in poverty. Almost a quarter of the Armenian population, 23.5% to be exact, is living in or vulnerable to poverty. Those living in rural or border areas or earthquake zones have different things on their mind than a New Years’ celebration. They wonder if they’ll be able to put food on their table tomorrow and 2022. is too far away for them.

Shirak, Lori, and Kotayk Province are among the poorest in Armenia, and they are not the last to become so. In the aftermath of the 2020 war, Armenia’s people will become much more impoverished than before.

…has only brought misery and grief to the Armenian people. Those dissatisfied by how the government handled the war took to the streets just to realize everything will stay the same. The blame for the abysmal warring strategy will be placed on the few who will lose their positions of power. But not the one with the ultimate authority. That one will never admit to his faults.

Instead, Armenian mothers were left wondering what had happened to their sons. Others will write so many letters to the government pleading for the ruling regime to urge the return of prisoners of war—the return of their children home.

The Armenian spirit, the same one that endured genocide and decades of war, was crumbling, leaving only disappointment, and hurt in its wake. For the last two years, there was no cause for celebration, leading people to take drastic measures.

…the country was the last chance in the eyes of many Armenians this year. When the Armenian economy shrank 7.6 percent in 2020, the last of the people’s savings were gone. And just like in 2008, when the previous economic crisis struck Armenia, people are looking for a way out.

The spikes in immigration come in numbers; more specifically, about 22,000 Armenians were granted Russian citizenship in the first half of 2021.

Vahe Grigoryan, a 20-something from Tavush, states his reasons for leaving clearly. “All my extended family moved to Russia over the last ten years, and they are making a living; meanwhile in Tavush, there is no work, or if there is it’s nothing you can build a future on,” he says, adding that “The only people who have any sort of life here are in Yerevan.”

The current survey in collaboration with the United Nations researching emigration out of Armenia shows that the emigration is a bit slower than expected simply because of COVID-related travel restrictions.

Ruben Yeganyan, an economist and demographer working on this survey, stated that “It’s possible that a lot of people want to leave, but they can’t.” He also added that “People are fed up. I would call it a post-war shock, distrust, they [ the people in Armenia] don’t trust any organization.”

These problems are just the tip of the iceberg, and there are many other issues people in Armenia are struggling with. The poverty, post-war trauma, and economic crisis are simply the most significant issues at the moment that need to be dealt with urgently by the government, something Armenians are still waiting for.

Unfortunately, the same government still found it prudent to rejoice and celebrate while their people suffer. And while we can admit that the current regime has some significant issues to solve, and they too are entitled to a moment of reprieve, throwing an extravagant New Year’s Party for a selected few is not in any way sensible or humane.

At the very least, judging by all that was done for the Armenian people in 2021, a celebration in ”12 Club” was not deserved.

As of today, a new petition was issued to battle the injustice done by the Armenian government to its people. Learn more about the petition here and join those determined to make the difference- for you, for them, for Armenia.